Maximum Available Fault Current… What is it? 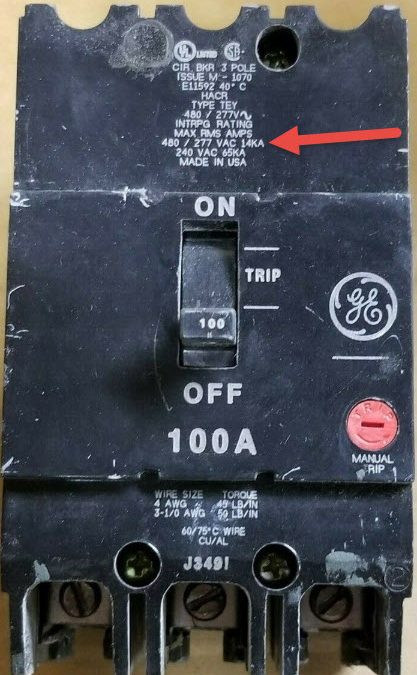 Maximum Available Fault Current… What is it?

Have you ever noticed “Interrupting Rating” on the front of a breaker?

Take a look at the highlighted area of the 60A breaker picture below: 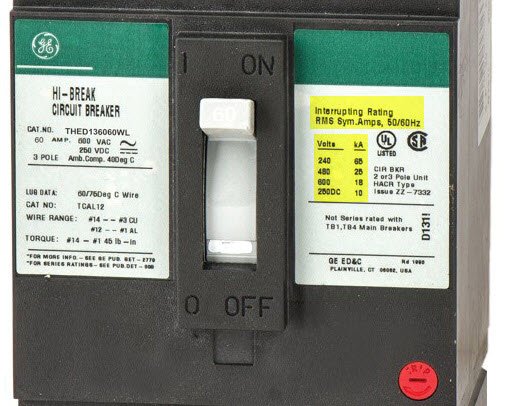 If this breaker were operating at 600V it has an interrupting rating of 18,000A, at 480V the rating is 25,000A, etc.  But what is an Interrupting Rating? The 2020 NEC (National Electrical Code) defines Interrupting Rating as:  The highest current at rated voltage that a device is identified to interrupt under standard test conditions.

Also known as KAIC (Kilo Ampere Interrupting Capacity), this is the maximum the breaker is rated to which means it’s important to ensure that your maximum available fault current is less than this rating of the equipment at the point of installation.  Starting in the 2011 edition of the NEC, section 409.22 showed up and has remained in later editions, it states: “An industrial control panel shall not be installed where the available short-circuit current exceeds its short-circuit current rating”. Similar requirements for other types of equipment are sprinkled throughout the most current 2020 edition as well.

What happens if a breaker does not have a high enough interrupting rating?

Think about water flowing down a pipe as an analogy for electricity. For this example, consider electrical current (amps) to be the GPM (gallon per minute) of water and an electrical breaker is instead an automatic water valve.
A breaker rated to 100 amps is built to stop electrical flow above 100 amps, so the equivalent automatic water valve will stop water flow over 100GPM. But what if the main pump for the whole system can supply way more than 100GPM?  For example, what if the system can supply 18,000GPM?

If the 100GPM valve feeds many small loads (i.e. motors in an electrical system), which start pulling 400GPM total, the valve is going to stop water flowing, this amount of time might be after 10 seconds. But what happens when a pipe ruptures, catastrophic failure occurs and now the system is demanding everything from the main pump which can supply up to 18,000GPM?

We hope the 100GPM valve can shut down under that much stress and we hope it shuts down quickly otherwise there will be a very large mess.  If the 100GPM valve only has a maximum rating of 14,000GPM then we don’t know what’s going to happen at 18,000GPM, fingers crossed it works.

Going back to electricity we can look at a specific example.  Consider a GE brand, TEY style, 100 amp breaker that feeds equipment named “PANEL X”. This breaker is rated to a maximum 14,000 amp fault current.
If PANEL X pulls more current than 100 amp, eventually the TEY breaker will trip. The length of time that it takes to trip is based on the tolerances as specified by the manufacturer (GE). Below is a picture that shows those exact tolerances, it is called a TCC (time vs current characteristic), for a GE brand, TEY style breaker. 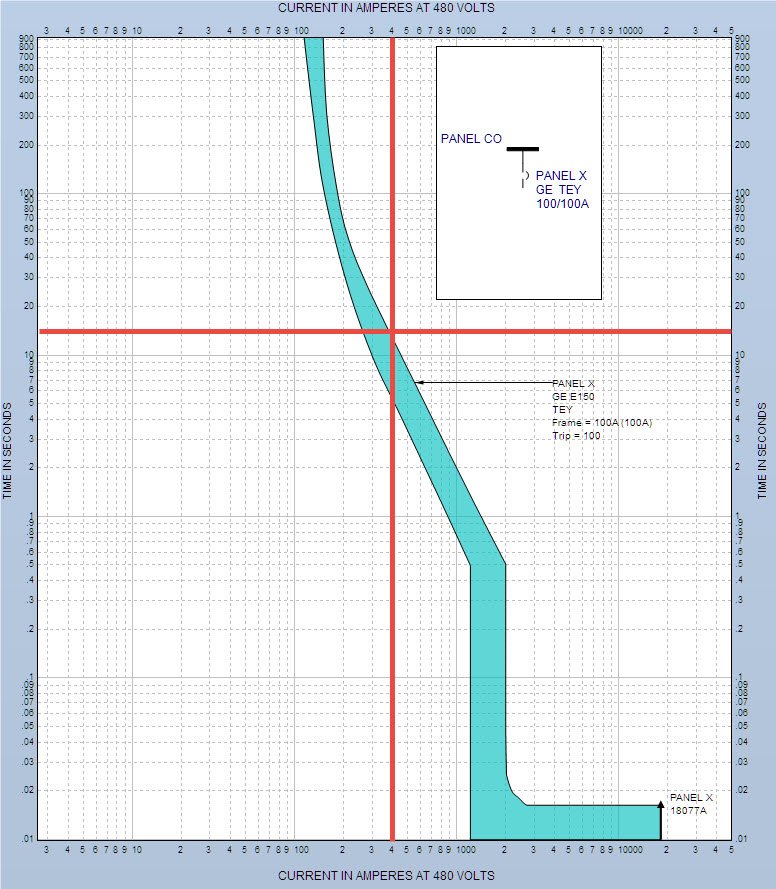 A red vertical line is drawn on the TCC at approximately 400 amps as an example. If you trace it up from the bottom and note where it crosses through the teal shape, that will reference the amount of time this breaker will take to trip. A horizontal line is drawn at that cross section, ~15 seconds. To summarize: if that breaker sees 400 amps of load, it will take ~15 seconds to trip.  Also notice, if a vertical line is drawn less than 150A, it will never cross the curve.  A 150A breaker should theoretically run all day with less than full load.

The same method is applied for any amperage: draw up vertically based on current draw, see where it crosses through the teal curve then draw horizontal from that point for the time. You’ll notice greater than 3000 amps the breaker starts to trip very fast, less than 0.02 seconds. Time is important because it tells us how long an arc flash can grow and grow. Once a breaker trips, the source disappears and so does the arc flash. If someone were to test or troubleshoot, makes a mistake, and accidentally touch two phases together or phase to ground, an arc flash would occur and the system could demand all available fault current, in this case ~18,000 amps. This is known as the “maximum available fault current”, it is different at each point in your system.  It is a calculated value based on utility feed information and impedance (wire size, wire length, transformer characteristics, etc) through the electrical system. 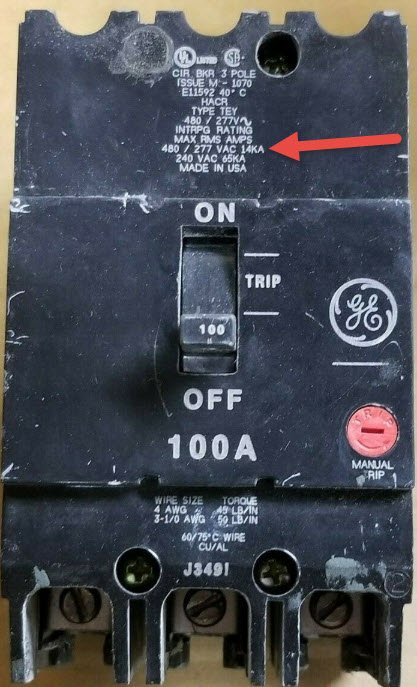 We don’t know if this breaker will trip if a fault occurred with greater than 14,000A of available fault current.  We don’t know if it will survive after it trips, if it will blow up, cause a fire or anything in between. This breaker is not rated to that level nor has not been tested to that level of exposure. Even if the panel has a low arc flash rating, if a breaker does not trip when it should, that excess amperage will then be exposed to other components such as wiring which may start melting and create fires. For this reason we recommend replacing underrated (aka over-dutied) protective devices when possible/feasible.  Some items are easier than others and have direct shape form replacements, others require redesign.

When we conduct an arc flash evaluation we collect data to create a one line drawing of your system.  This data includes requesting utility characteristics, wire size, wire lengths and transformer nameplate data.    We also have to collect breaker information. All of this data allows us to calculate maximum available fault current at each point in your system as well as identify which devices might be underrated (i.e. Interrupting Rating is less than the maximum available fault current).  We call this an Equipment Evaluation and is included in the final arc flash evaluation report.