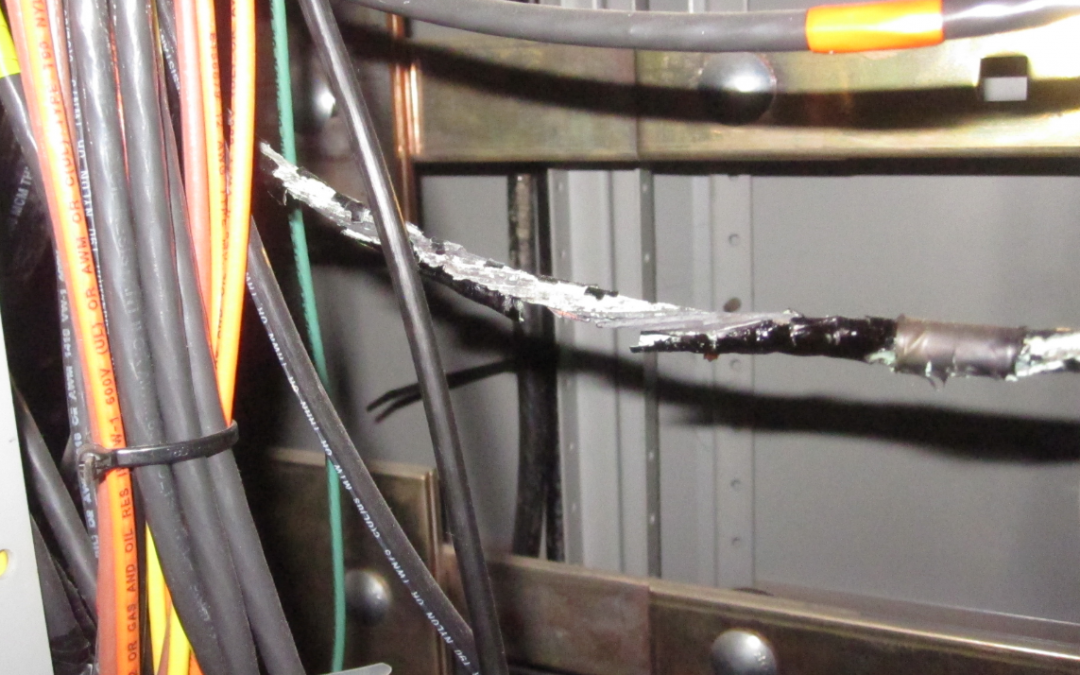 Rozel trains your employees how to work on electrical equipment safely, but what about your contractors?  You can’t train your contractors and you can’t always watch them but you can hold them accountable.

Our travels took us to the motor city.  During an infrared scan we discovered a damaged wire wire going to a large rooftop air conditioner unit.  The insulation on the wire was missing for about 15 inches away from the breaker.  The wire was so hot the insulation melted right off of it!  Not only that but the wire looked brittle, almost as if it wiggled, it would just fall apart.  The worst part was that the wire was draped through the main bus of the MDP (main distribution panel).  The arc flash sticker we applied previously indicated over 100 calorie arc flash at 18”.  In other words, if you make a mistake working on this wire, the equipment would not survive and you likely wouldn’t either especially with no PPE.  Here is an example of a large arc flash (probably not even as large was the one in this story):

The Rozel team alerted the facility safety manager and she called her HVAC contractor, who showed up with a master electrician.  Upon arrival a meeting was held and discussed the dangers and risks associated.  It was made clear that they could do a visual inspection but any work would need to be done during a plant wide shutdown and proper LOTO.  The contractors were allowed to go on their own  having been to the facility several times prior.

An hour passed and the contractor returned, letting us know that work was done and they were leaving.  The contractor spliced the wire and reconnected!  The safety manager stood up and said “thank you, you’re going to get paid, but you’re never working here again” then showed them to the door.  The facility’s safety manager understood the severity of the condition.

We held a pre-brief with the contractor, we told them their hazards, we identified that this job was so risky that under no circumstance should they attempt to do it live and it still happened.  This was a learning experience for all parties involved, the facility now has better policies in place to be preventative rather than reactive to events like this.  Do you hold your contractors accountable?